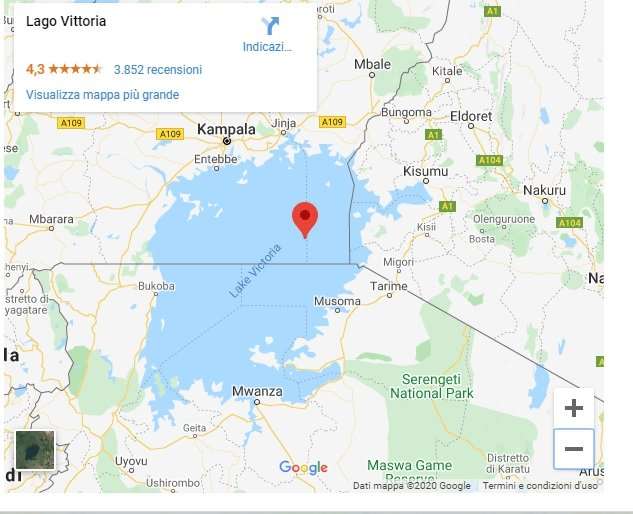 Welcome to the largest lake in Africa, the largest tropical lake in the world and the second largest sweet water lake on Earth. Lake Victoria holds all these records  very easily, as if they did not even concern it. A quiet, beautiful, inner “sea” … it will leave you breathless. Also known as Nyanza, it is in the western Rift Valley.
Three nations share its water. Tanzania has the largest part, while Uganda has 45% and Kenya only 6% of the lake. Many short and long rivers give their water to fill this lake. The largest one is River Kagera. Lake Victoria is never lacking water, though it also feeds its only emissary river: White Nile. This is the small stream that will later become River Nile itself.

Numbers will tell you a lot, about Lake Victoria. Its surface is 68870 sq.km, the drainage basin is 184000 sq.km, the coast circumference is over 4800 km. Over 3000 islets are scattred all over the lake, and 84 have become a tourist resort in Uganda. Some are “floating islets” consisting of huge formations of aquatic plants and algae.
In a dry continent like Africa, this great water basin gives life to land, animals and humans. The wildlife of the lake’s coast is not the typical African one tourists expect to see. Few great predators mainly live along the shore between Bunda and Mwanza – where the last part of Serengeti National Park overlooks the lake. But you can meet hippopotamus, crocodiles, turtles and wild birds everywhere.

Lake Victoria gives fish and plants as food for the people who live on its shores. It is also an interesting tourist place so it makes local economy run. Many villages and towns arise around the lake, plus some big city as well. Uganda’s main cities, capital Kampala and Entebbe, are on the northern shores. Tanzanian cities – Musoma, Mwanza, Bukoba – also stand by the lake, in the south.
Trips around Lake Victoria are not “real” safaris. You do not go to see wild animals, here, but mainly to admire the lake and its natural environment. Still there is the possibility to meet typical African animals, on the way. It depends on which side of the lake you will visit.
Many tour operators organize boat trips to the many islands and islets of Lake Victoria. In Uganda tourists can stay on the Ssese Archipelago. From the Tanzanian city of Mwanza you can go by boat to Ukerewe Island National Park. You can also visit the small part of Serengeti stretching up to the shores of the lake.

To get to Lake Victoria you can land at Dar Es Salaam Airport and take a local flight to Mwanza International Airport. Or land at Nairobi and go by car (6 hours drive) to the Kenyan shores of the lake. If you arrive at Entebbe Airport you are already on place, since this Ugandese city is already on Lake Victoria’s shore.
The best period for a trip to Lake Victoria is from January to March and from June to September.
africa african safari lake victoria mwanza safari tanzania uganda
Share