21/09/2020 0 comment
The land of Masaai has recently become also the name of a National Park, Masaai Mara. These people are the real soul of Eastern Africa and especially of Tanzania and Kenya. A safari would not even be a safari if you could not meet and greet these wonderful men and women, bright in their lively dress’ colours. They have been living there for ages, along river Nile and its tributaries, along the great African lakes’ shores, side by side with fierce, big animals. It must be a honor to meet a member of Masaai Tribe. Do respect this land as you respect them.

Masaai people were born along the Nile, in the northern part of its course. They lived around Lake Turkana but had to leave their mother land in the 15th century. They settled in a long “corridor” between Kenya and northern Tanzania and all over the regions now considered National Parks. Since they arrived from far north, today they are the southernmost Nilotic language speakers.
Their languages are ancient Maa and Nuer, but today young people of the tribe also speak Swahili and English.
The tribe survived the slavery trade because they fought against the traders and mixed with fierce animals, so to make it harder for white men to find and kidnap them. Today the large tribe has divided in 22 groups: each one has its own tradition and dialect, still they consider themselves as one nation.

Masaai tribe is patriarchal. Men rule the community and old men are the ones supposed to decide laws. Masaai laws are mainly oral, though recently some have been written down. Inside the tribe, family groups form clans and each clan has a totemic animal as a symbol. They do believe in the power of these totems, though the main god is Enkai –  a double-faced spirit. Black Enkai, which is the good and loving one, Red Enkai which is anger and revenge.
Though their god can be vengeful and scary, the laws of Masaai men are not that cruel. This tribe does not know any “capital punishment”, no death sentences at all. The guilty ones must pay, in order to apologize for any crime: they shall pay with their cattle, their huts or their goods. Masaai are mainly shepherds or breeders, though now they are also good craftsmen. They are famous for their many coloured clothes and jewels, now sold as souvenirs to tourists.

Today, Masaai people are part of the modern African society. Many of them keep on living as nomads in the lands that used to belong to their fathers. Their lifestyle, in fact, does not affect the life of the National Park’s animals and they are a part of those regions. The nomads still live in straw huts, set in a circle in order to protect both people and animals, inside. Some Masaai live in towns. There are also important names belonging to this historical tribe: the Olympic runner Rudisha, two prime ministers of Tanzania – Mr Sokoine and Mr Lowassa – and Ms Nice Lengete, the first woman to ask the tribe to stop female genital mutilation in Kenya. 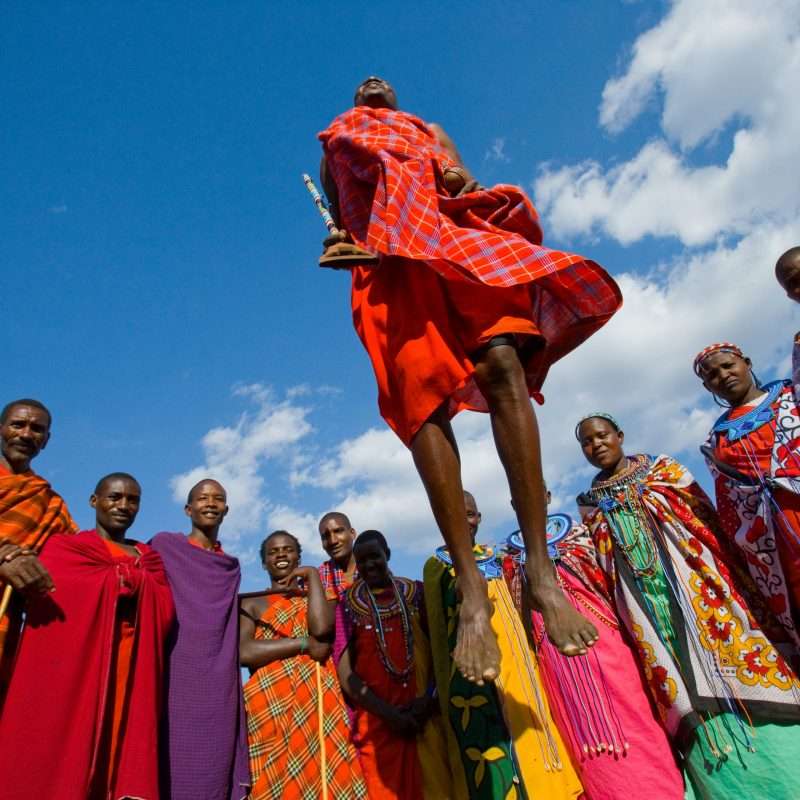