The jewel in Ngorongoro ‘s crown is a deep, volcanic crater, the largest unflooded and unbroken caldera in the world. About 20kms across, 600 meters deep and 300 sq kms in area, the Ngorongoro Crater is a breathtaking natural wonder.

Originally part of the Serengeti National Park, The Ngorongoro Conservation Area (NCA), measuring 8,300 square kilometres, is the only place on earth where mankind and wild animals co-exist in harmony. The NCA became a Man and Biosphere Reserve in 1971 and was declared a World Heritage Site by UNESCO in 1979. 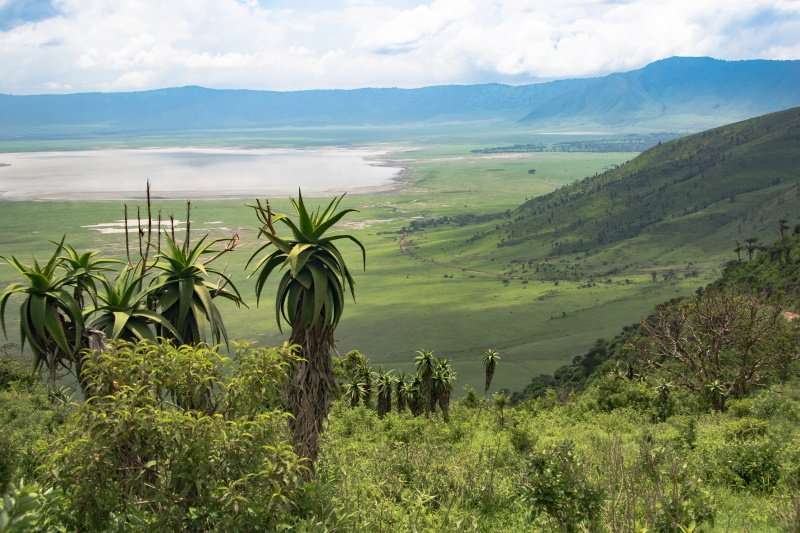 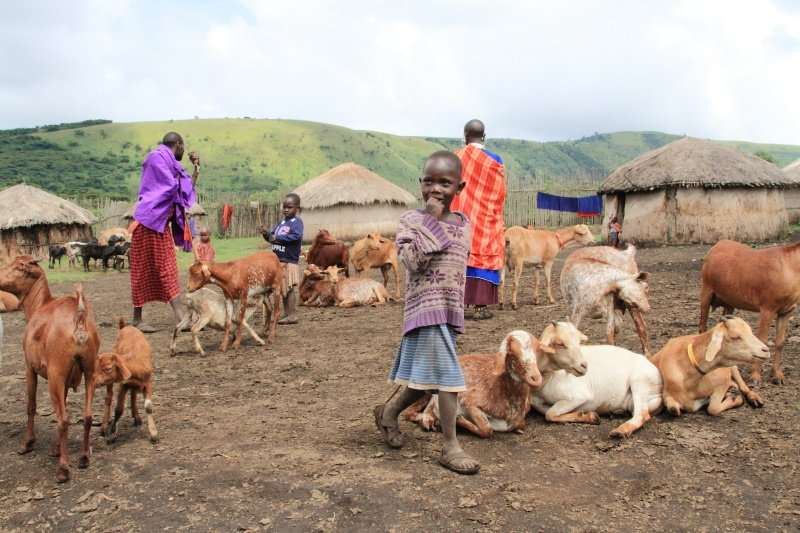 The Ngorongoro Crater is a large, unbroken, un-flooded caldera, formed when a giant volcano exploded and collapsed some three million years ago. The Ngorongoro crater sinks to a depth of 610 metres, with a base area covering 260 square kilometres. The height of the original volcano must have ranged between 4,500 to 5,800 metres high. Apart from the main caldera, Ngorongoro also has two other volcanic craters: Olmoti and Empakai, the former famous for its stunning waterfalls, and the latter holding a deep lake and lush, green walls.

On the leeward of the highlands protrudes the iconic Oldonyo Lengai, an active volcano and Tanzania‘s third highest peak after Kilimanjaro and Meru. Known to local people as the Mountain of God, Mount Lengai‘s last major eruption occurred in 2007. At the mountain’s foot is Lake Natron, East Africa‘s major breeding ground for flamingoes. 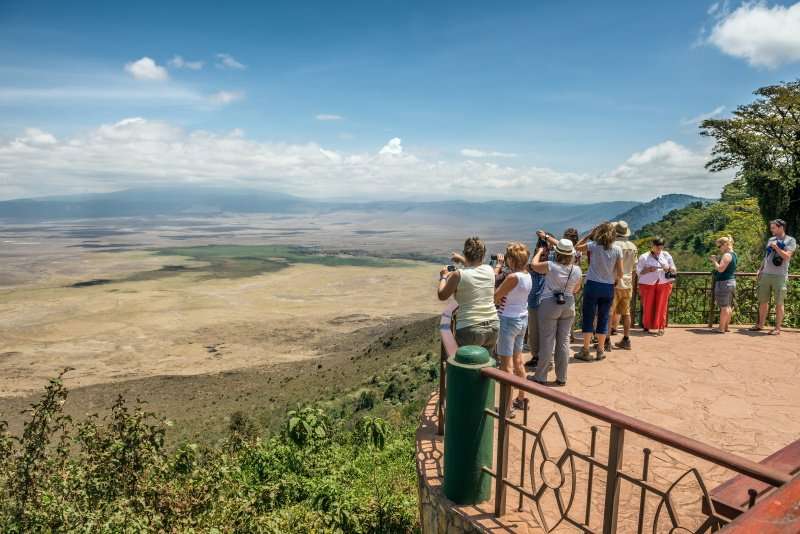 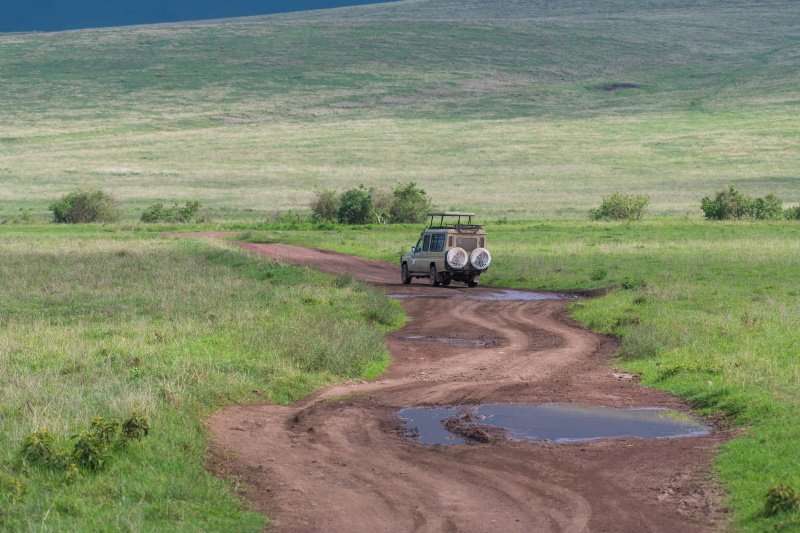 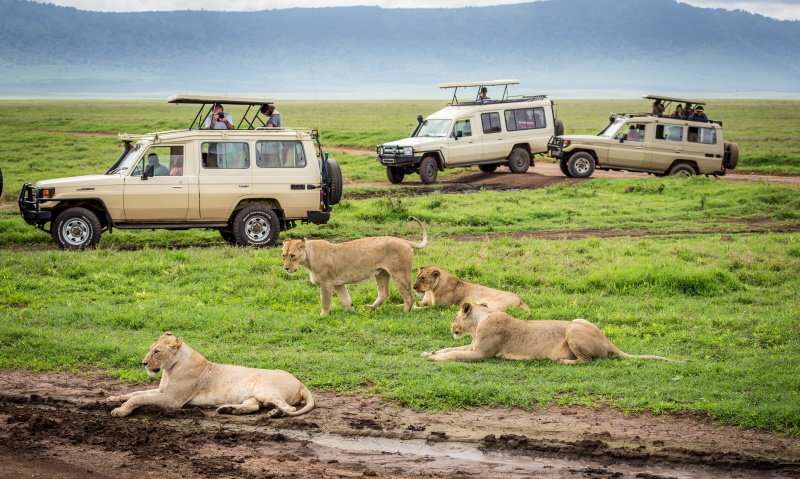 The Ngorongoro Conservation Area contains over 25,000 large animals including 26 black rhinoceros. There are 7,000 wildebeests, 4,000 zebras, 3,000 eland and 3,000 Grant’s and Thomson’s gazelles. The crater also has the densest known population of lions, numbering 62. Higher up, in the rainforests of the crater rim, are leopards, about 30 large elephants, mountain reedbuck and more than 4,000 buffalos, spotted hyenas, jackals, rare wild dogs, cheetahs, and other felines.

The legendary annual wildebeest and zebra migration also passes through Ngorongoro, when the 1.7 million ungulates move south into the area in December then move out heading north in June. The migrants passing through the plains of the reserve include 1.7 million wildebeest, 260,000 zebra, and 470,000 gazelles. The Lake Ndutu area to the west has significant cheetah and lion populations. Over 500 species of bird have been recorded within the NCA. These include ostrich, white pelican, and greater and lesser flamingo on Lake Magadi within the crater, Lake Ndutu, and in the Empakaai Crater Lake, where a vast bird population can be observed. 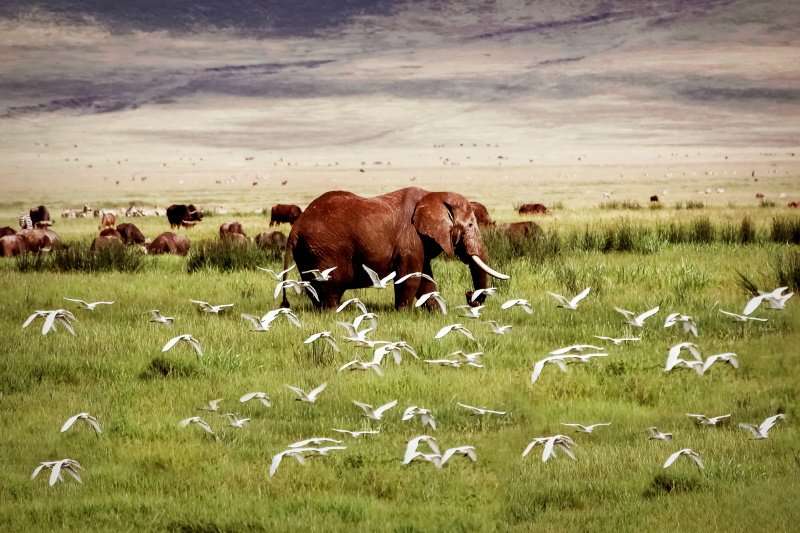 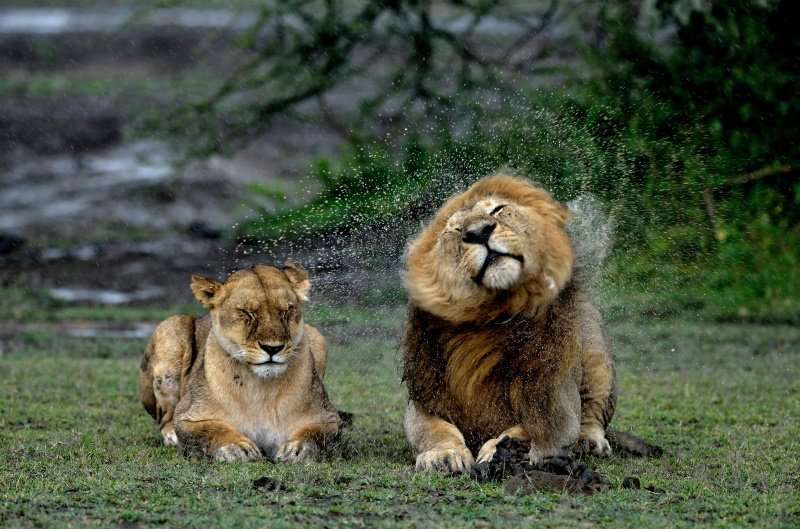 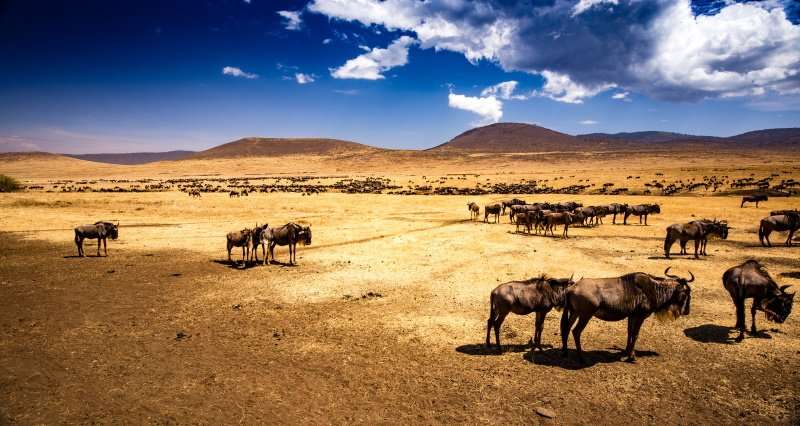 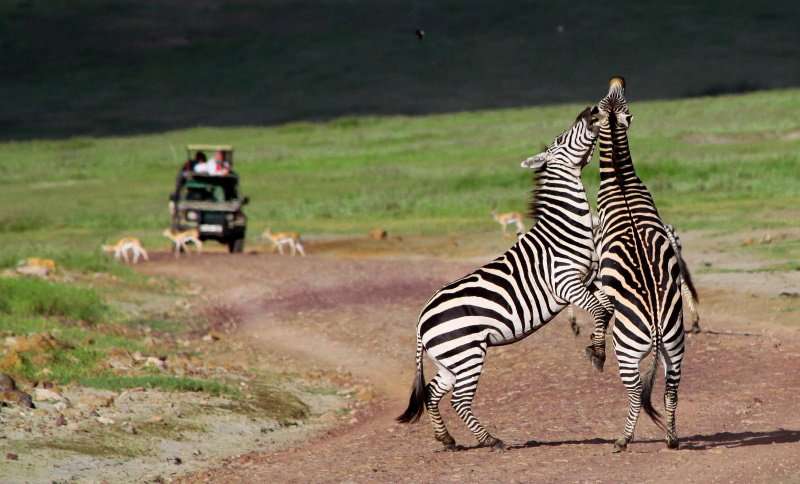 Scrub heath, grasslands, high open moorland, and the remains of dense evergreen forests cover the steep slopes of the crater, while highland trees including Peacock Flower, Yellow-Wood, Kousso (Hagenia abyssinica), and Sweet Olive can also be found. There are also extensive stretches of pure bamboo on Oldeani Mountain, and Pencil Cedar on Makarut Mountain to the west. Dove- weeds dominate the lower slopes, while the upland woodlands contain Red Thorn Acacia and Gum Acacia that are critical for protecting the watershed.

The crater basin is covered by open short grass plains with fresh and brackish water lakes, marshes, swamps, and two patches of Acacia woodland. The Lerai Forest is home to the Yellow Fever tree and Acacia, while Laiyanai Forest has Pillar Wood and Acacia Lahai. The undulating plains to the west are grass-covered with occasional Umbrella Acacia and Commiphora Africana trees. Blackthorn Acacia and Zebrawood dominate in the drier conditions beside Lake Eyasi. These extensive grasslands and bush are rich, relatively untouched by cultivation, and support very large animal populations. 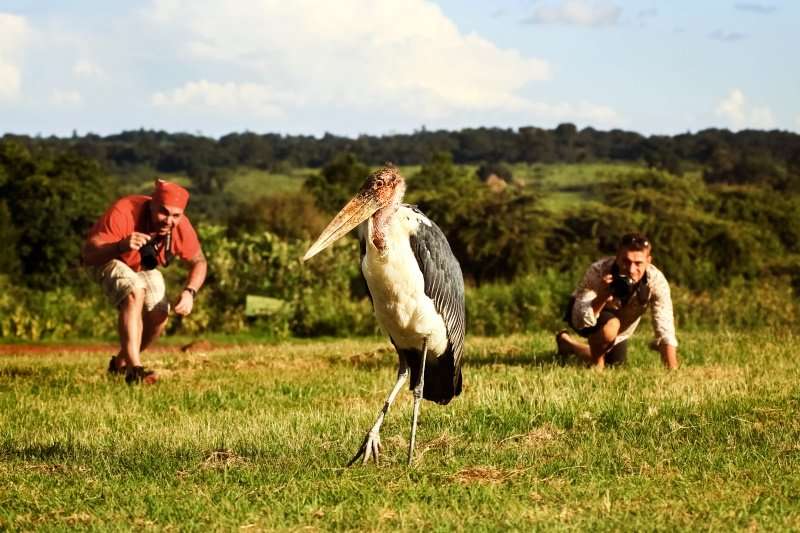 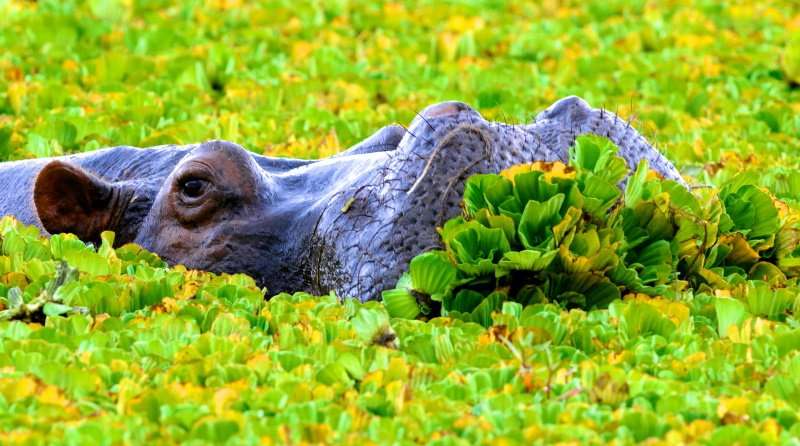 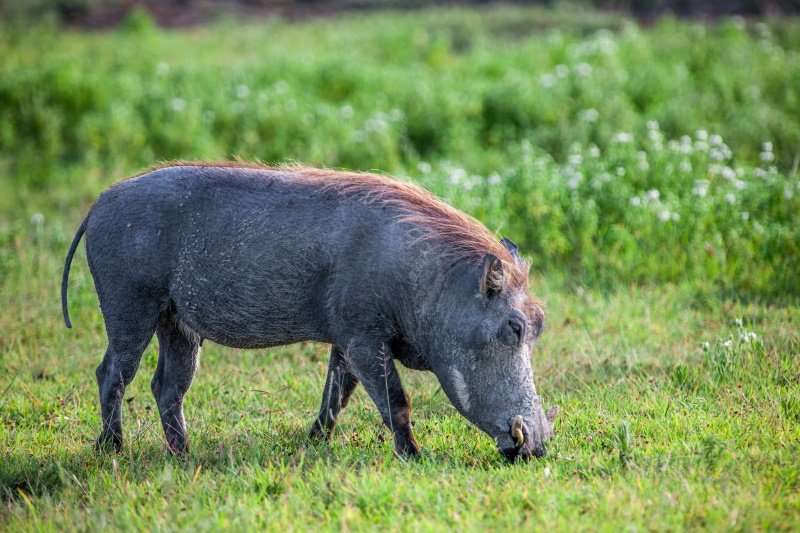 How to Get Here

BY AIR
One needs to fly to Kilimanjaro International Airport at Moshi, situated at the foot of Mount Kilimanjaro. From there one can get a charter flight, take a taxi or make use of the free shuttle service. The distance from Moshi to Arusha is about 55km.

BY ROAD
The road from Arusha to Lodoare Entrance Gate is 160km long. As of recently, the entire journey is on tarmac and it takes about two hours. Unless you stay on the main roads, which are graveled, a 4×4 vehicle is essential when entering the Ngorongoro Conservation Area and the Serengeti National Park. 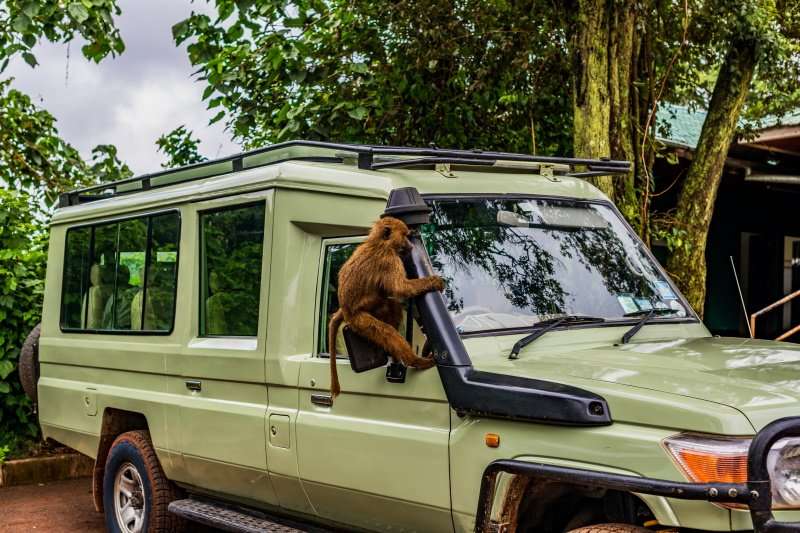 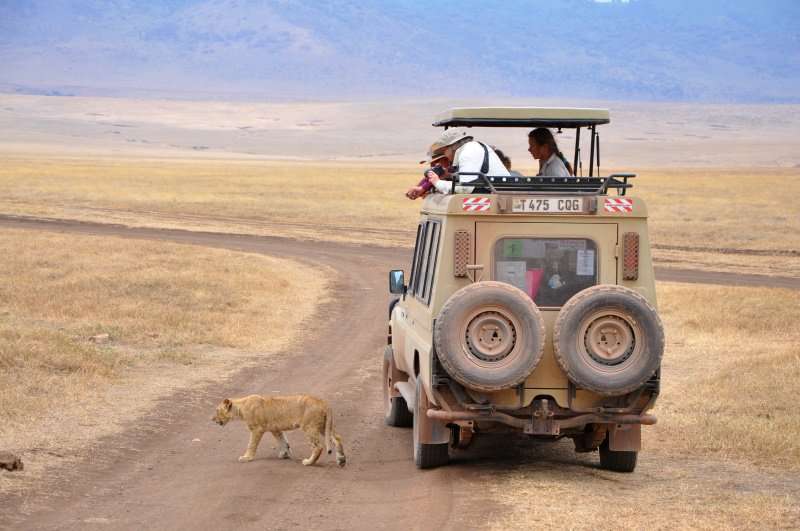