In this tale we’re going to tell you about our expedition to Lake Chala, a beautiful and quite water-filled caldera divided between Kenya and Tanzania.

We were in a village outside Moshi for a wedding when I read about Lake Chala. Wasn’t so far from the place we were, and i knew it could have been a nice one-day expedition.

Lake Chala is located 55km north-east of Moshi, not far from Mt Kilimanjaro and on the Kenyan border. In fact, the international border between Tanzania and Kenya is located exactly the middle of the lake!

This lake is a water-filled caldera that was formed after volcanic activity reconducted to Mt Kilimanjaro caused it to collapse. The crater is 3km in length and 2.4km wide, with a surface area of about 4.2km². The depth of the lake is between 70 to 90m and all around is surrounded by almost vertical walls as high as 100m in some places.

During the year, depending on the season, the colour of the water of this beautiful lake changes from turquoise, deep blue to green. It is said that the lake is supply via underwater streams from Mt. Kilimanjaro and drains again into neighbouring Lake Jipe also via underground tunnels.

Like in almost all the african lakes, african cichlis are the common habitants of these waters. But Lake Chala tilapia is found only in Lake Chala and is critically endangered.

Certainly we had to descended the crater till the level of the waters for try to fish one of these.

Nile crocodiles were introduced in the early 1900’s to the lake and a 18 year old British woman was killed in 2002 by a relatively small Nile crocodile while swimming at night in the lake. After this event, the Kenya Police Service said that the lake was “infested” with crocodiles while the Kenya Wildlife Service said, “Crocodiles are found in Lake Chala and it is not regarded as safe to swim at all.

However, over the years, talking with the people who live around, seems local fishermen have killed all the crocodiles and it is highly likely that none exist there today.

We also spent a couple of hours, trying unluckily to catch some big tilapia, and we didn’t see any strange movement on the shores.

The legend of a whole Maasai village disappeared into the lake circulate between the people who live around this area. The legend said that the spirits of those people still haunt in the bushes around the lake today.

Lake Chala and the surrounding area is a must place to visit, not just because of Kilimanjaro that can be seen on clear days in the background but also because it thrives with life. Walking around you can spot more than 200 different birds. And small mammals such as blue monkeys, colobus monkeys, baboons, jump from one tree to one other over your head. Even dik-dik and kudu are common to be spotted.

Being so close to Tsavo National Park, in the right days, you might be able to see large herds of elephants that migrate back and forth between Kenya and Tanzania. 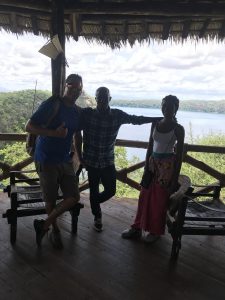 After this expedition, a fresh beer was really necessary.

Lake Chala Safari Lodge is in the best position to offer you a refreshing pit-stop. You can enjoy all the beauty of the Lake from their viewpoint.

For this expedition to Lake Chala we didn’t choose any local tour operator, we just reached by ourselves from our accomodation  Lake Chala Safari Lodge with Uber  and they provided us a guide for the descend.

But you can find lot of local tour operators that can arrange you this excursion in both Tanzania and Kenya.