Today we want to tell you about our trip to Zambia, in particular of an experience that has left us breathless: the Victoria Falls excursion, a UNESCO World Heritage Site on the border between Zambia and Zimbabwe, one of the greatest attractions and one of the most spectacular waterfalls in the world located on the Zambezi River, the
fourth largest river in Africa and also considered to be the largest fall in the world. 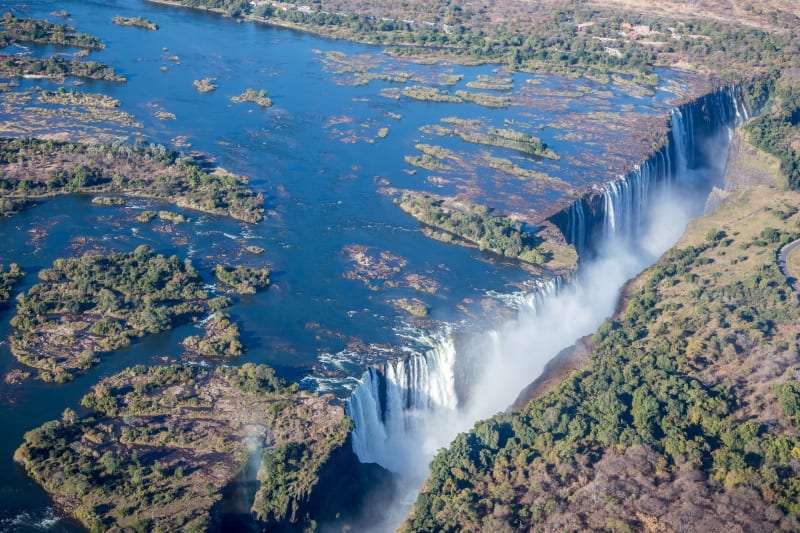 Mosy-oa-Tunya: The smoke which thunder

Large 1708m and 108m high, the noise of Victoria Falls can be heard from a distance of 40 kilometers, while the spray and mist from the falling water is rising to a height of over 400 meters and can be seen from a distance of 50 kilometers. For this reason the locals call it Mosy-oa-Tunya, The smoke which thunder.

A great thunder, followed by a rainbow party is what we heard and what we saw after the entrance from the Zambian side in the rain forest.

A breathtaking beginning for our trip.

David Livingstone, the first European to cross Africa from south to north discovered this waterfall in 1855, during his Nile source research. Despite the inconveniences, he was fascinated by the beauty of the falls, named Victoria as a tribute to the Queen.
In 1857 Livingstone wrote that no one in England can even imagine the beauty of this scene.

“Scenes like that are the ones that watch angels flying”.

He was accompanied by soldiers but only two of them took the risk of approaching the
waterfalls with Livingstone. For centuries local African tribes had a sacral fear from the waterfall.

Following the circuit we started walking along the waterfall matched by dozen of rainbows. In fact, for the entire length of the waterfall, the water that is thrown into the air creates spectacular rainbows.

The falls were formed in a zone of crustal faults. On the crest of the fall numerous islands divide the main flow into several branches. During floods, the water flow capacity reaches half a million liters of water per minute. The water level varies throughout the year; it’s at its top peak in April, when the rain season finish and with an average 500,000,000 liters of water flow and it is at its lowest level in October and early November.

During the rest of the year Victoria Falls is a machine that grinds liters of water constantly and throws them into the sky with a roaring thunder.

Once on the border with Zimbabwe, we cross the railway bridge that connects the two nations and enjoy another beautiful angle of this natural wonder. We then return to our footsteps to go and admire the sunset at the Royal Livingstone Victoria Falls Hotel, where surrounded by beautiful zebras that graze the grass on the banks
of the river, in total relaxation you can admire the last meters that runs the river Zambezi before making its jump.

Check other affiliates in Zambia to join this experience

Check Zimbabwe Tour operator to add this excursion to your journey!